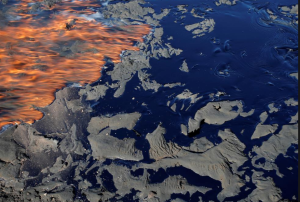 This is a scene of oil fields on fire in Qayyara, a town with a population of about 15,000 people that is 60 km (35 miles) south of Mosul, Iraq, where the US-led coalition of 60 countries is conducting a siege against an estimated 3,000 to 5,000 ISIS fighters in a metropolitan area with an estimated civilian population between 750,000 & 1.5 million people. The number of Iraqi & US coalition troops appears to be a closely guarded military secret because media disagree on the numbers. Secrecy, sub rosa operations is the new way the US conducts war to undercut antiwar opposition.

Media reported that Qayyarah was fully captured by Iraqi forces in August 2016. After Iraqi forces (armed, trained & controlled by the US Pentagon) recaptured a nearby airbase in July, the US Pentagon announced the deployment of 560 more troops to develop the airbase for use in the siege on Mosul.

There have been many photos like this one from Qayyara since the US coalition captured it which all claim ISIS set the oil fields on fire as they retreated. This one is from November 2016; there are also more recent ones. We know from the Iraq War that oil fires burn up to five years so it’s possible they were set by ISIS. It’s also possible they were set off by US bombing of Qayyara during the siege to retake it.

Last week, the US Department of Defense issued a special report on US bombing operations in Iraq & Syria. Since Assad supporters oppose US intervention in Syria as a regime-change operation, we would expect them to report frequently about US bombing operations, at least in Syria. Instead they harp only on US-backed “head-chopping militias” as if that were the only military method employed by the US.

That’s because if Assad supporters investigate US bombing, it contradicts, or at least weakens their claim of a regime-change scenario. There are no reports from the Pentagon nor the Syrian & Russian governments that US bombers are targeting anything other than ISIS strongholds in Syria. The US is letting Russian bombers do the dirty work of destroying popular opposition to Assad & hides its overall strategy in Iraq & Syria behind rhetoric about the fight against ISIS.

There is considerable confusion about US strategy in Syria. Intentionally so, because so much of it is secret & renders support to the Assad regime. It derives immense political advantage from such secrecy & obfuscation as we see from the capitulation of antiwar & progressive forces to Assadist propaganda.

So these are the Pentagon figures of US coalition bombing missions in Iraq & Syria:

The countries that participate in the bombing strikes include: