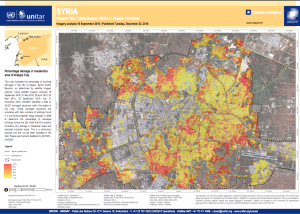 So interesting that UNITAR published this satellite imagery of Aleppo acquired from November 2010 through September 2016 & just published on December 20th. It identifies 33,521 residential buildings damaged by bombing but excludes the industrial areas.

The UN probably knows then which military forces have been bombing Aleppo to smithereens for over five years. Have they not shared that with media or the US who still claim uncertainty about whether it’s Syrian or Russian bombers?

Has the UNHCR checked out the catalogs of high-tech military monitoring & surveillance systems? Surveillance technology employed by the US Pentagon claims surgical precision when it targets someone for assassination. But the UN can’t see what thousands of Burmese troops are doing in Arakan state? That must be where former UN chief Kofi Annan learned his “see no evil, hear no evil, report what the junta says” approach to genocide in Myanmar.

Satellite map of residential destruction in Aleppo in greater detail: