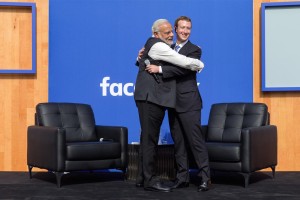 Not to tempt fate, but since Facebook gave so many of us an adrenalin rush by closing us out for an hour, I post this photo from Mark Zuckerberg’s FB wall: it’s him & India’s fascist prime minister Narendra Modi.

It’s not just a case of you lay down with dogs you wake up with fleas. It’s a case of you hang out with Modi your Facebook members wake up with surveillance operatives hanging on their every word. Actually Modi’s regime closed down social networking sites in Kashmir over the religious holiday last week. They were probably discussing how to collaborate on that.

Oh well, the FBI and Mossad already have that covered. What are you gonna do? Stop exercising free speech? No! You use FB to campaign for it.