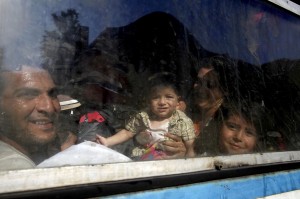 These are immigrants in Macedonia on a train en route to Serbia. It has to be an absolutely wrenching experience to travel hundreds of miles through uncertain territory, eluding border patrols & criminal gangs, while trying to protect small children–not just from dangers but from illness & disease. The worst was Rohingya parents stranded on boats drifting for weeks with no food or water. Of course most are fleeing war & genocide. That doesn’t even address the women traveling alone with kids or the children traveling unaccompanied.

Children are the faces of immigration. They are the faces of war & of genocide. Not an inch can be conceded to regimes & right-wing xenophobes & racists who want the borders sealed. The false distinctions between immigrants & refugees can no longer be respected in any way at all.

The forces for human & immigrant rights have huge battles on our hands in every country. While thousands cross borders in desperation, regimes & politicians play with immigration rights to serve their own ends. In the US, the Obama regime held out hopes for amnesty–long enough to get the addresses of the undocumented. Then in a foxy political move, had a court withdraw the possibility, so now immigration officials know just where to pick them up, along with their undocumented parents. Jeb Bush & Hillary Clinton are promising the moon again for the undocumented so they can garner the Latino vote for the election.

Immigration rights will not be won through trust in politicians. That’s a fool’s game. They will only be won by working people carrying a banner emblazoned with “An injury to one is an injury to all.” Such an international movement would transform the ground we stand on & shake the very foundations of racism & social hatred.
Immigration is a human right! Open the borders!