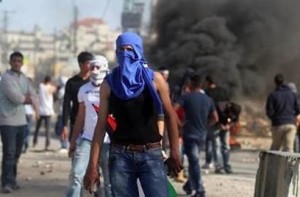 Netan-psycho is reportedly bristling that a US official called him a “chickenshit” which means a worthless, contemptible, & cowardly person. It seems so wrong to let him get off describing only the best side of him. How could they ignore that he’s also deranged? For what he did in Operation Ethnic Cleansing in Gaza, for the ongoing embargo of Gaza, & for what he’s doing in the West Bank he qualifies as a monster & war criminal in a league with Bush, Obama, Pinochet, & all the other contemptible murderous figures in human history.

The report in the Israel National News (which is run by nutcake religious Zionists) claims the rock throwers have caused serious injury & even death, including to “scores of Israeli children & infants”. One wonders why there’s been no coverage of these deaths even in Zionist media which is prone to invention & exaggeration when it comes to Palestinian self-defense. The article, which favors the new sanctions, says they’re not just hurling rocks but fist-sized rocks, bricks, chunks of concrete, & cinder blocks. What treachery & insolence against bulldozers, armored wheel loaders, tear gas, skunk bombs, grenades, rubber bullets, & live ammo!

The punishment for Palestinians, including little kids, for throwing rocks has always been draconian. Hundreds of kids & teens are sitting in the Israeli gulag for throwing rocks against Zionist settlers & their military protectors who poison Palestinian wells, assault them, pull up their olive trees, expropriate their lands.

For our part, we salute the rock throwers for incredible determination & fearlessness because they are sitting ducks for being shot or arrested–& that includes Palestinian children.

Build the hell out of the cultural & economic boycott of Israel (barcode beginning 729) & demand “No military aid to Israel!”