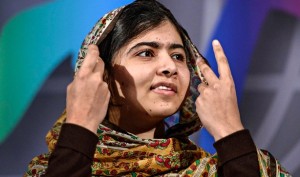 Despite all the blandishments being dumped on her to corrupt her & turn her into a toady for the status quo, Malala Yousafzai seems like a fine young girl at heart. We’re hoping that as she matures & becomes independent from the regrettable guidance of her father & the yoke of establishment honors, she will prove to be bigger in spirit & not subject to manipulation. That’s a long shot because they‘re working her over to make her indebted to them & reluctant to express her own views. But it took some guts to even mention drone assaults to Obama when she was there as window dressing for his wars.

The purse from the Nobel Peace Prize is US$1.5 million so she’s got a bundle of money & most likely a line of “advisers” trying to get their hands on it. She just raked in more dough from the World’s Children’s Prize & donated $50,000 of that to the UN agency dealing with Palestinian refugees to help rebuild some of the 65 schools in Gaza used as refugee centers which Israel bombed. It would have been preferable for her to give the money to relief agencies in Gaza so the money was managed & controlled by Palestinians. But UN reps are likely all over her trying to get their hands on that money, where there will be no accountability.

In handing over the dough to the UN she said, “We must all work to ensure Palestinian boys & girls, & all children everywhere, receive a quality education in a safe environment. Because without education, there will never be peace.” Who knows who wrote that speech? Not that she isn’t capable of writing her own eloquent words but she is now a marketable product with jingoism experts writing ditties like for a commercial.

Education is a good thing; the oppressed have always valued it. In the US, after the Civil War ended, Blacks set up the first free public education system (for whites & Blacks) in the US because they understood the transformative power of education in overcoming inequality. But lack of education isn’t the reason there’s no peace in Gaza. Israeli apartheid & ethnic cleansing are the problem. Does young Malala understand that? If she does, would she be allowed to express that by her handlers? Fat chance! Because if she ever does, the awards will abruptly stop & the ditty writers will be composing slanders to discredit her.

They’ve a long way to go in corrupting Malala beyond redemption but it’s not for their lack of trying. They’ll keep dumping prizes, they’ll keep dumping dough, they’ll flatter & arm-twist & cajole, & maybe even threaten. But we can hope–because human beings are complex & often wonderful–that she will break free of the yoke trying to make her a mealy-mouthed champion of the status quo spouting empty ditties like a UNICEF commercial. We can hope that she will take her place with the forces of social transformation & speak the truth–the whole truth.