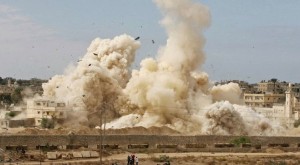 This photo of the Egyptian army blowing up homes on the Egyptian side of the Gaza border is proof positive the US gets it’s money’s worth out of the $1.5 billion in annual military aid to Egypt–military aid used to buttress authoritarian rule in Egypt & Israeli control over Palestinians in Gaza. On Tuesday, authorities ordered Egyptians living along the border with Gaza to evacuate so they could blow up their homes to set up a buffer zone “to stop weapons & militant trafficking” between Egypt & Gaza. This keeps Egypt as the southern flank of US policy in the region & enforcers of the Israeli embargo on Gaza. Egypt also indefinitely closed the Gaza crossing so Palestinians cannot leave. This is a noose around the necks of Gazans.

The buffer zone will include water-filled moats 500 meters (1,640 feet) wide along the 13 kilometer (9 mile) border between Egypt & Gaza. It’s not sure if they’ll be throwing alligators into those moats just to make sure nothing goes in & no one comes out of Gaza. The purpose of the buffer zone & the moats is to thwart tunnel diggers, a vital way Palestinians smuggle in medicines, foods, & other vital needs banned by the Israeli embargo. Under the Morsi regime, those tunnels were flooded with sewage; under Israel’s Operation Ethnic Cleansing, most were bombed out.

Egypt also claims this is to keep Hamas from meddling in Egyptian politics by supporting “Islamic militants” fighting the regime. Hamas remains the all-purpose whipping boy to justify barbarisms against Gaza. But isn’t the traiterous Palestinian Authority of Mahmoud Abbas in charge now in Gaza? Shouldn’t that ease restrictions rather than tighten them up?

The worst of it is the Egyptian uprising expressed fullest active solidarity with Palestinians which is one reason the US Pentagon worked so laboriously with the Egyptian generals to undo the uprising. Israel cannot survive without militarizing the entire region in its defense. Neoliberal policy in the Middle East has turned Israel into an unstable armed fortress & bastion of reaction & social hatred rotting at its core.

The Israeli embargo is war by other means against Gaza; it is an ethnic cleansing device of barbaric execution. It must be politically opposed & exposed for all the world to see. That is where the cultural & economic boycott (BDS) of Israel comes in. Let’s speak frankly: those stunted political minds who oppose BDS because it will hurt the working class of Israel have their heads stuck up the nether regions of Zionist barbarism & after Operation Ethnic Cleansing should extract their heads & hang them in shame.

(Photo from BBC; photographer not identified)