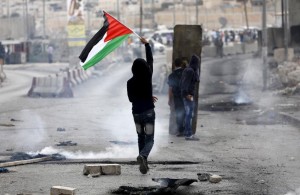 Just witnessing Israel’s siege of Gaza in the summer of 2014 was a nightmare that never seemed to end–not just for those in the US whose government bankrolled & armed the barbarism but for over a million people around the world. Thousands mobilized on social media to tell the truth mainstream media tried to hide. People in every country, from hamlets to metropolitan centers, marched by the hundreds of thousands to stand with Palestinians in the most massive & international show of power since the anti-Vietnam War movement of the 1970s.

No one believed Palestinians could sustain such barbarism, could take such a pounding & endure such losses & grief for so long without being utterly defeated, all resistance bombed to smithereens. But then images began to appear of Palestinians standing in cement rubble waving the flag with Israeli bombers still prowling overhead. Those were hallelujah moments at a gruesome time–that the spirit of Intifada had survived such an onslaught.

Their struggle is important for many reasons–not least of which is their intransigent refusal, generation after generation, to bend the knee to colonialism though they surely must be exhausted by the relentless aggression & terrible losses they have endured.

After 67 years of colonialism, apartheid, ethnic cleansing, & being vilified as terrorists, the Palestinian call for the economic, cultural, & academic boycott of Israel (BDS), has broken the barriers of international solidarity so they are no longer isolated. The truth is out & we must render a powerful solidarity that takes the spirit of Intifada international.

This young protester is holding the Palestinian flag during assaults–what media calls “clashes”–by the Israeli military at the contentious Qalandia checkpoint near Ramallah in the West Bank. Another hallelujah moment.

Our fullest solidarity & respect. Build the economic, cultural, & academic boycott of Israel & demand no aid of any kind to apartheid Israel.