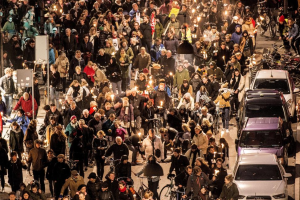 It’s been some rough news weeks: the Israeli rampage against Palestinians; the bodies of 95 more refugees washed up on the Libyan coast; the US intentionally bombed a hospital in Afghanistan along with news of Green Beret war crimes in the same region.

So this torchlight procession in Copenhagen, Denmark is a brief reprieve that assures us the human race is capable of greatness. Denmark was the center of the anti-Muslim cartoons ten years ago & of other anti-Muslim activities earlier this year. But this is a welcoming procession/protest for refugees after the Danish government tightened rules for asylum seekers.

Media has been reporting that Danes oppose refugees because they ‘refuse to assimilate & insist on special rules’; because their ‘Scandinavian way of life is threatened by Muslim asylum seekers who refuse to learn Danish & stay in isolated communities refusing to embrace European values.’ They also report public concerns about increased crime–the usual malarkey used against immigrants & refugees in every country & malarkey that’s been disproved by hundreds of studies going back nearly a century, though that doesn’t stop the fear-mongers.

This march is a direct rebuke to all that & a sign that while “something is rotten in the state of Denmark,” among working people there is another dynamic operating.

Hats off to Danish working people.