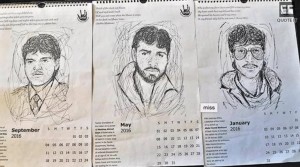 The Indian occupation of Kashmir is often called a “low intensity conflict,” a military concept that came into vogue in the 1980s during US wars in Central America. It wasn’t really a new way of waging war but a military public relations gimmick devised to circumvent massive international antiwar sentiment prevailing from the Vietnam War. That opposition called the “Vietnam Syndrome” was considered a pathology that needed to be overcome & such gimmicks were part of that.

There’s no way in hell over 700,000 Indian troops in Kashmir with a population of 4 million people can be considered low intensity warfare any more than US use of Israeli-armed death squads & proxy guerrilla forces were in Central America. The only military element that seems to be missing is aerial bombing. By that definition, the Israeli occupation of East Jerusalem & the West Bank are also low intensity conflicts–though not of course Gaza. There’s nothing low intensity for those subjected daily to occupation & barbarisms like extrajudicial executions, torture, mass rapes, mass incarcerations without due process, an estimated 70,000 murdered, & thousands kidnapped & disappeared by Indian forces.

One of the most active political forces in Kashmir is the Association of Parents of Disappeared Persons (APDP) co-founded in 1995 & led by Parveena Ahangar, known as “the iron lady of Kashmir” for her fearless & steely determination mobilizing family members of the disappeared. Ahangar, who was married quite young & has no formal education, became an activist in 1990 when her 17-year-old son Javed Ahmad Ahangar was picked up by the Indian army during a night raid & disappeared.

The APDP estimates that between 8,000 & 10,000 have been disappeared in Kashmir since 1989. They hold monthly rallies in Srinagar demanding the Indian government cease this monstrous practice & answer for those arrested, tortured, murdered, & dumped in unmarked mass graves. They recently released a 2016 calendar with sketches for each month showcasing one of the young men disappeared. The photo here is three pages from that calendar.

The APDP was part of The International People’s Tribunal on Human Rights & Justice in Indian-administered Kashmir (ITPK) which issued a report titled “Buried Evidence” about their investigation between November 2006 & November 2009 of 2,700 unmarked mass graves. It’s an absolutely gruesome report where the investigators report being intimidated & threatened by Indian military personnel; were refused access to entire districts to examine unmarked graves; were unable to identify many bodies because of evidence of disfiguring torture; interviewed gravediggers commandeered by the Indian military who remained traumatized at what they witnessed & were forced to do. The ITPK interviewed community people who saw bodies thrown in rivers & found evidence that many disappeared were transported to places like Gujarat in India proper & executed & buried there.

The Kashmiri struggle for self-determination is vilified by Indian government claims that foreign militants & terrorists are crossing the border & infiltrating, especially from Pakistan. They use this to justify summary executions & explain away the numbers of those in unmarked graves. Even if they were foreign operatives, whatever happened to due process? The idiocy of the claim is exposed by the presence of 700,000 military personnel not against foreign militants but against the Kashmiri people.

The investigation found that most victims of disappearance were men & young boys & found only a few women victims. It’s a particular form of social control & malignancy that targets males to terrify & leave vulnerable children & women. What’s remarkable is that Kashmiri women have been so steely in standing up against mass rapes by the Indian military (as another form of social control) & against disappearances.

Our deepest respect & fullest solidarity with the struggle for self-determination in Kashmir.

For those who would like to read the ITPK report:http://www.kashmirprocess.org/…/g…/BuriedEvidenceKashmir.pdf