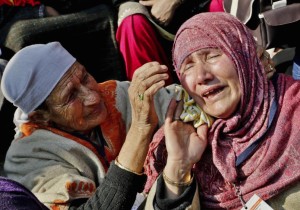 Editors are not writing a book when they caption a news photo but they are reporting news & ought to offer a coherent explanation of what’s in the photo. After identifying these women as relatives of “missing Kashmiri youth” attending a rally yesterday, the editors said according to the Association of Parents of Disappeared Persons (APDP) who organized the rally, “more than 8,000 people have allegedly disappeared in the conflict-ridden Himalayan territory.”

It’s a damn good thing we know what’s going on otherwise we might be left to wonder why so many young people are disappearing. Are they just walking off into the sunset? Are they running away from home? Are they running off to join the circus or see the world? Why is it alleged? Do they think the kids could be hiding out somewhere? Is there some reason to suspect the parents are lying & in fact their kids are home watching television? And what’s with the “conflict-ridden Himalayan territory”? Is it “conflict-ridden” because kids just can’t get along with their parents? Are these Kashmiris a testy, irascible lot who can’t get along with each other?

It isn’t pedantry to ask editors for coherence when 8,000 young people have disappeared. As a news agency it’s their responsibility to lay out essential information without blowing smoke or talking riddles.

The caption should have said: ‘These women grieving the kidnapping & disappearance of their kids by the occupying Indian military are protesting at the monthly APDP rally in Srinagar. More than 8,000 have been disappeared since 1989 & the protesters are demanding answers.’ Turns out the truth doesn’t take any more space than blowing smoke.