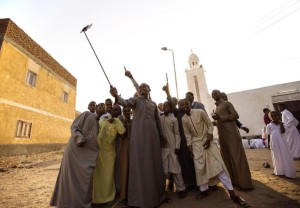 These Nubian men & boys, delightfully celebrating Eid al Adha with a selfie, live in the Nuba region, Aswan in southern Egypt. Who are the Nubians? The teaching of world history in US high schools & universities is a travesty of colonialism & racism. As an avid student of history, I rejected the elitist good king/bad king scenario explaining political events & change & always wanted to know what ordinary people were doing. But when I decided to stop studying history backwards & start at the “beginning,” I accepted the Eurocentric view that history began with the Greeks. (Forgive my ignorance; that was over 40 years ago.)

It was often through art museums I learned there was an entire historical universe not centered in Europe but in Asia, Africa, the Middle East, & that the best heritage of Greek achievement often came from those places or from interaction with those cultures. Even the Islamic Empire is excluded from US education. But not from museums.

The Boston Museum of Fine Arts (MFA) is a magnificent place with immense, spectacular galleries of Egyptian art which they renovated about 20 years ago to make even more imposing. The renovations were part of expanding the museum to nearly twice the size & included shifting the main entrance elsewhere. To avoid long lines I would enter by the old main door & did so for years without noticing an unlit gallery just off the foyer. Accidentally I noticed it was actually a gallery & decided to explore. An Irish woman tourist & an American Black male student were also there & we explored the gallery together.

It was a gallery of Nubian art, indistinguishable from Egyptian art except that the people depicted were clearly of African ancestry. The three of us were aghast at the disrespectful treatment of Nubian art & could not believe it was not incorporated into the renovated Egyptian galleries or at least adjacent to them where it belonged. And we talked about how our education about Africa & Egypt was a mockery of reality.

It should be noted that the MFA was just as disrespectful of American Black art, displaying it in a busy hallway next to fire extinguishers & behind potted plants. After repeated objections by patrons, including myself, the art was moved to a suitable gallery.

Scholarship has corrected much of the Eurocentrism warping historic education but this is not yet common pedagogy in US schools–nor I suspect in European, Canadian, or Australian schools. US schools still don’t teach the history of Native Americans & the colonial conquest nor a non-supremacist history of American slavery, Black Reconstruction, or Jim Crow.

This historical warp has everything to do with the ability of the US government to conduct wars without massive opposition because it portrays itself as a liberating force for primitive cultures.

Not every one can afford college; that’s what libraries, art museums, & now the internet are for. Correcting the historical warp is part of building solidarity by showing the profound connections human beings have across the globe in history & in every intellectual field of endeavor.