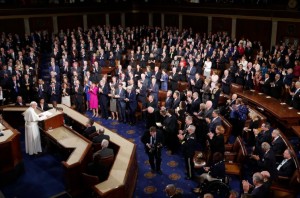 Pope Francis spoke at great length to the Congress; he spoke so long & said so little it must have seemed like an eternity, so chock-full it was of cliches & sentimentalities–the kind of speech we’re accustomed to from politicians.

He said he wants to dialogue with seniors because we are a “storehouse of wisdom forged by experience.” He’s got that straight. So let’s dialogue, Pope!

There was little to disagree with in his homily & the US Congress, that bastion of war appropriations, broke often into enthusiastic applause–especially vigorous applause when he called for compassion for immigrants.

The thing about compassion that’s so objectionable is that it’s laced with pity, with noblesse oblige. So politicians can work themselves into a lather of compassion without altering immigration policies which are permeated with cruelties. It’s an apolitical response to immigration, which is why the Congress ate it up. They got pity up the wazoo but they don’t intend to grant amnesty or citizenship. Bernie Sanders is considered the best of them & he thinks immigration would destroy the nation-state.

It can never be said enough that solidarity with the oppressed is not laced with pity. One hates to take issue with Jesus but there are no “least of our brethren” among the poor & oppressed. That “least” thing doesn’t just express noblesse oblige but contempt. Jesus must never have said that so we can blame it on translators.

Solidarity doesn’t view others whether they be poor, immigrant, disabled, as less than ourselves in any way because that would be despicable. We are yoked to them (if we are not among them) in our humanity & because to make this world suitable for human beings to live & love in, it is imperative we stand together as one. Pity doesn’t cut it in struggle.

Many love the Pope’s sermon; others have sat through too many political speeches & sermons to be impressed. But one thing can be said about Francis: he has changed the narrative around the church from the unresolved issue of pedophilia among priests to poor people. Deft move. Savvy politician.

And as long as we’re dialoguing, there’s one more thing, Pope: in politics, it’s the deed counts more than the word.