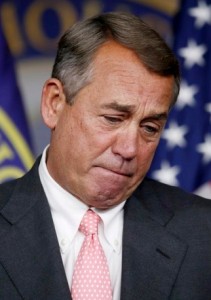 This is our man John Boehner (pronounced Bonehead) who just resigned as Speaker of the US House of Representatives. No one has ever been able to explain the function of the House of Representatives except to make itself a complete nuisance of itself to citizens of the republic. It’s considered more plebeian than the Senate & be assured, not because the latter has more patrician social habits.

Speaker of the House is second to the vice president in case of death or impeachment of the president. The thought that Boehner would lead the US is no scarier than Biden as president–or for that matter, Reagan, Nixon, Clinton, the Bushes, Obama.

We sympathize with Boehner’s drinking problem but do wish he would not habitually come to affairs of state half in the wrapper–especially when he’s adjudicating war appropriations. That crying schtick of his is not endearing but surely related to inebriation. We only wish alcohol explained his reactionary pandering to Tea Party politics.

Political analysts will be parsing & pouring over every detail of the power plays in Congress that drove him to resign. Who gives a rat’s ass!? He claims it was an epiphany moment when the Pope whispered in his ear. His entire wasteful life must have flashed before his eyes & made him awash with remorse. It was such a graceless fall from altar boy to right-wing hack.

Before we get all teary-eyed at his redemption, we should consider, out of all the attacks he engineered on working people, his singular condemning legacy of authoring the passage (along with Ted Kennedy) of the No Child Left Behind Act (NCLB) of 2001, which was signed into law by George Bush in 2002. NCLB was a weapon of mass destruction lobbed at public education which there is now open rebellion against by teachers, students, & parents across this country. Boehner called it his “proudest achievement.” Of course, neither Kennedy nor he had any commitments to public education since Kennedy was a product of elite private schools & Boehner of Catholic schools. Both chaired annual fundraisers for Catholic schools.

It’s a matter of no concern what Boehner does with the rest of his life. He ought to begin with rehab & proceed from there to a monastery where he can inflict no more harm on the human race.