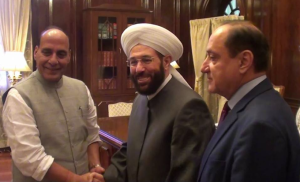 There’s apparently some confusion about the relationship of Ahmad Hassoun, the hangman & Grand Mufti of Syria, to Israel. Israel is part of the counter-revolution supporting the Assad regime because a popular revolution against dictatorship in a neighboring country is distinctly to the disadvantage of Israeli colonialism & apartheid & would significantly strengthen the Palestinian struggle for self-determination. But playing both sides of the street is an integral part of Zionism since historically Jews were persecuted in Syria & driven out of the country. The last 18 Syrian Jews were evacuated during the siege of Aleppo last year.

The confusion is partly due to anti-Semitic rubbish about Jews running the world through the Israeli lobby, media, banks. Assad propagandists tap in to that crap by claiming Israel’s involvement in Syria is part of a plan to take over a huge section of the country for its “Greater Israel” project–which is a modern version of the fraudulent “Protocols of the Elders of Zion.” It’s been an effective ploy for Assadists to link Israel in that way because it evoked latent & quiescent anti-Semitism among some Palestinian supporters & drew them in to supporting Assad’s dictatorship. It also weakened & discredited a section of Palestinian solidarity, a movement which has worked tirelessly to demarcate the sharp differences between hating on Jews & opposing Zionist colonialism.

Those political forces who want to end the hating & defeat those political forces who feed off it must distinguish between Jews, who have been historically persecuted & subject to pogroms & genocide, & Zionists who want to build a godless but theistic state based on supremacy–a state which is at odds with the welfare of Palestinians as well as Jews, no matter what Zionist propaganda claims.
The Grand Mufti & hangman of Syria is a friend of Israel but an enemy of Jews, Palestinians, Syrians. He is a war criminal & should face prosecution as such.

(Photo is the grand hangman in India where he met with government officials, scientists, & others who all pledged support for the Assad dictatorship.)