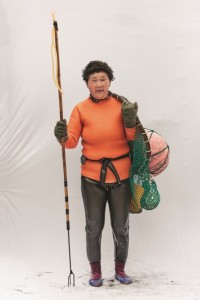 There is a remarkable photography exhibit by Hyung S. Kim at the Korean Cultural Service in NYC depicting haenyeo women from Jeju Island, a 700 square mile island 50 miles southwest of the Korean Peninsula & a province of South Korea.

Haenyeo women are deep sea divers who harvest the sea bed for abalone, sea urchin, octopus, & seaweed. Haenyeo are believed to predate the Common Era & there are statues & shrines extant on Jeju indicating they have been around since humans began harvesting food from the sea. Without the use of air tanks or other modern equipment, they dive as deep as 33 feet (10 meters) for several minutes.

In the 1960s, there were over 30,000 haenyeo diving daily; today there are barely 2,500 with most of them over the age of sixty. The youngest Kim photographed was thirty-eight & the oldest over ninety. Discussions of the exhibit point out that this is likely the last generation of haenyeo, that the tradition is facing extinction. Intellectual light-weights suggest that increased shark attacks & heart risks from diving can explain the loss of this tradition. Others suggest young women have other options than this extremely arduous way to earn a living. The more likely reasons are South Korea’s efforts to turn Jeju into a tourist & honeymoon haven & the presence of a new military naval base on the island to handle US missiles which is affecting marine ecology. The base is actively opposed by thousands of Jeju residents who sustain brutal suppression by the South Korean regime.

Whatever Kim’s intentions in his portraits of the women, in many ways the exhibit is analogous to the photographers commissioned by the US ruling elite (including J.P. Morgan) at the end of the Indian wars of extermination to go west & document the extinction of Native Americans. By that time, Native Americans were a vanquished people living in squalor on reservations & the portraits, though stunning, are glorified images to disguise the barbarism of genocide. The people of Jeju of course are not subject to genocide but to neoliberal colonialism.

Many commentators point out that haenyeo women hold a special place in Jeju society; they have more independence, self-respect, & political power. Historically, they were not only skilled divers but also involved in cultural, social, & political affairs. When Japan defeated Russia in the war of 1905, the settlement acquiesced to the Japanese annexation of Korea in 1910. During the annexation there was a continuous struggle against Japanese colonialism often led by haenyeo women because Japan used Jeju as an airbase & military fortress.

In WWII, Japan was defeated after the US dropped two nuclear bombs on Hiroshima & Nagasaki in 1945. Over 60,000 Japanese troops & administrators remained on Jeju. Throughout Korea, including Jeju, popular committees formed to replace Japanese colonialism with an independent Korea rid of foreign dominance, including Japan, the US, & Soviet Union. Socialist activists were a central & respected part of the organizing because of their resistance to Japanese colonialism.

Between the Japanese defeat & 1946 Jeju formed a successful self-government based on the popular committees. Korea had been a united nation for over 1,000 years & in the early weeks of liberation from Japanese colonialism there was no sense of division into two Koreas at war with each other. Both the Soviet Union & US troops occupied Korea after the war with the zone of control along the 38th parallel which now divides North & South Korea. Dividing Korea into two warring nations became a US strategy to prevent a left-wing or democratic socialist government from forming.

The US military controlled the south & were alarmed by the popular democratic movements emerging. Under Syngman Rhee (the right-wing anti-communist leader installed by the US as leader of South Korea), military campaigns involving right-wing vigilantes were waged against the popular committees throughout Korea & thousands of activists persecuted & murdered for opposing the partition of Korea. In April 1948, the South Korean military & vigilantes backed by the US occupying army went after Jeju activists. Seventy-percent of the villages were torched & an estimated 30,000 to 60,000 people massacred. The US & South Korea tried to pass the massacre off as a suppressed communist rebellion but it is now recognized for what it was: the destruction of a popular movement to prevent the division of Korea into two warring countries.

The airport near Jeju City is new to accommodate the onrush of tourists & military personnel for the naval base. But excavations under the runways in 2007 turned up mass graves for a few hundred of the thousands massacred in 1948. This sordid history was suppressed for decades by the South Korean government but there is now a museum in Jeju City to memorialize the April 3rd 1948 massacre.

Jeju is now designated one of the wonders of the world & depends on tourism so they’ve built quirky museums like Love Land with 140 outdoor sculptures of couples in myriad sex positions. They’re not trying to outdo the Kama Sutra; they’re trying to make people forget the thousands massacred & still persecuted for opposing military occupation on that beautiful island. They cannot be forgotten until justice has been accounted to & Korea is once again a united, democratic country.