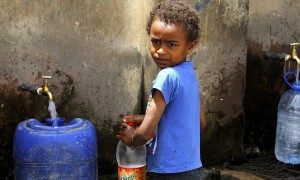 The caption to this photo of a child in Sana, Yemen said: “According to reports, many Yemenis were affected by the airstrikes carried out by the Saudi-led coalition against Houthi rebels.” Take a moment to recover from the idiocy of that statement. Is it any wonder people get cognitive disturbances from watching the news!?

Warplanes from Saudi Arabia, Egypt, Morocco, Jordan, Sudan, Kuwait, Qatar, Bahrain & the United Arab Emirates pummeled Yemen for days with logistical support from Somalia, Pakistan, & the US. Cities were bombed; 16 million Yemenis are without electricity; many have no access to clean water; over 100,000 are displaced & evacuated; tens of thousands fled for their lives to other countries. They estimate 600 were killed but they don’t have a clue & don’t give a damn how many civilians they’ve bombed to death.

They can talk Al-Qaeda & Houthis till the cows come home but the primary purpose of this carnage is to bomb the Yemen uprising of 2011 into smithereens, to make damn sure there isn’t an ounce of popular rebellion left intact to defy tyranny & US domination.

This kind of horror will continue until working people in the US get off their leaden asses & organize against these monstrous wars.
Our fullest solidarity with the people of Yemen & our heartfelt regrets the international antiwar movement is too weak to stay the hand of aggression.