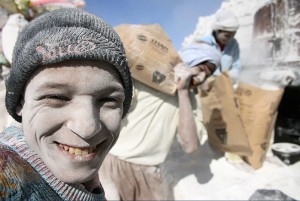 Limestone mining in Egypt goes back to pharaonic times. The Great Pyramid of Giza, the oldest of the Seven Wonders of the Ancient World, was completed in around 2,560 BCE & was surfaced in blocks of white limestone–as were many pyramids, some as old as 3,100 BCE. Scholars don’t agree on the character of laborers under the pharaohs but generally agree it was not slavery though it may have been seasonally conscripted. The difference may not have felt different but it was juridically different.

Nevertheless, in all that millennia one would think limestone mining would now be fully automated or that at least the harshest labor practices eliminated. But unfortunately the dynamic of neoliberalism, the barbaric phase of capitalism, is historically regressive & seems intent on simply bypassing feudalism altogether & outdoing slavery in its barbarism–particularly in the degradation of adult labor & exploitation of child workers.

Believe it or not, this is an eight-year-old boy working the limestone quarries of Minya, Egypt, about 186 miles (300 km) south of Cairo. Around 45,000 people, including 5,000 children work in the 1,500 quarries for US $7 to $13 a day. About 80 percent of the quarries are not legally authorized to operate & only a tiny percentage of the workers have social insurance to protect them against injury. The regime has a scam going here since limestone exports is a multi-billion dollar a year industry supplying the construction, pharmaceutical, fertilizer, & ceramic industries worldwide.

If the regime wants those quarries regulated & were committed to eliminating child labor, they could send some of the troops they used to crush the Egyptian revolution & straighten it out within a matter of days. It’s difficult to tell who the profiteers are in the quarries–whether it’s multinational mining enterprises that operate in other parts of Egypt (as part of neoliberal strip-mining of the country) or the military itself which has substantial properties & businesses in heavy industry. But the obscurity of ownership allows the regime to get away without providing social insurance in the case of injury.

In fact, the work is extremely dangerous & workers sustain frequent amputations, electrocutions, & often death. They use outdated, poorly maintained machinery with sharp rotor blades moving at high velocity to cut through the limestone & with electric cords connected to makeshift fuses that snake unprotected & in poor visibility across the quarry. They work without training or safety equipment except the sunglasses and masks they bring from home. The two local hospitals are not equipped to deal with life-threatening injuries so injured workers are usually transported to hospitals nearly 100 miles (150 km) south of Minya. Many bleed to death along the way; many lose their limbs permanently because they arrive too late to save the limb.

There is nothing more damning of neoliberal predation than the degradation of adult labor & the profligate use of children workers as part of that process. Most of these children will not live beyond their teens, at least in good health. Many who do survive will be permanently incapacitated in one way or another.

This state of affairs is exactly what the Egyptian uprising against Hosni Mubarak was all about: a rebellion against neoliberal colonialism. The Egyptian regime struck a devil’s bargain with the US in the Camp David Accords of 1978 (under that great so-called humanitarian Jimmy Carter), horse-trading support for Palestinians in exchange for arming the regime to the teeth with the most up-to-date arsenal so that the ruling elite, including the military, eight billionaires, & 22,000 millionaires can make a killing off the backs of children & working people.

This eight-year-old boy looks at least twice that & very unhealthy indeed. That “workers of the world” thing may sound so passe, so yesterday, so communist but human decency demands we join together in demanding accountability to justice & the end of child labor. That’s an enormous historic task but if humanity is to move forward we must unite to end the scourge of child labor wherever it rears its ugly bony ass.