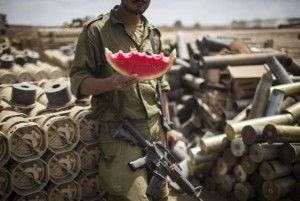 The caption to this photo read “An Israeli soldier eats a piece of watermelon near the Israeli-Gaza border on July 25, 2014.” Now the least interesting thing about this picture is the watermelon or what day the soldier ate it.

The only thing of interest in the photo is the size of those artillery casings used in the tank & troop assault on Gaza. That’s what they tore people in half with; that’s what indicts Israel for war crimes.

Some can say, “Aw come off your high horse, this is just a nice shot.” Maybe, but it’s reminiscent of the half-baked Zionist settler in Israel who worried if the war would make her fat: another instance of the evil of banality.