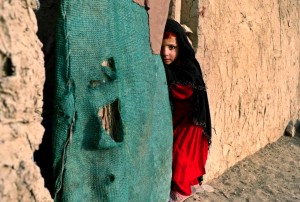 Emancipation US-style: 14 years of US-NATO war in Afghanistan–first under the guise of chasing Osama bin Laden dragging his dialysis equipment through the caves of Afghanistan & then under the guise of liberating women. One nail salon, several CIA torture prisons, a thriving drug trade, several unspeakable war crimes later, & despite Obama’s announcement the occupation ended a year ago, the war continues.

This little girl in Kabul is one of between 683,000 & 900,000 homelessAfghans according to the UN refugee agency (UNHCR). Millions are living as refugees in Pakistan & Iran. When the Pakistani government cracked down on Afghan refugees a few years ago & began demolishing their encampments, the UNHCR paid some of them chump change (about US $150) to move back to Afghanistan, knowing there would be no housing or schools. Thousands, including unaccompanied children, became part of the trek to Europe through Turkey & Greece.

US-NATO bombarded & occupied Libya in 2011 to liberate it from Gaddafi. It now has two competing regimes & is reportedly under the control of ISIS. When the Obama regime claims it is staying in Afghanistan to save it from several Taliban offensives, one shudders for the Afghan people. Because the US-style of emancipation involves massive continuous bombing including of hospitals, kidnapping, torturing, murdering civilians, massive homelessness, widespread child labor.

The historic imperative remains: rebuild the international antiwar movement demanding an end to these monstrous wars.

US out of Afghanistan! US out of the Middle East!