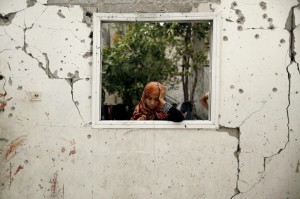 This young girl is mourning the death of three family members killed when Israel bombed the Jabaliyah refugee camp in northern Gaza. We can no longer bear to look at images of bodies being recovered from rubble, of children being carried into hospitals embedded with shrapnel & disfiguring injuries, of people lying in the street in pools of blood. It’s more than we can bear & our nightmare is this girl’s life.

Until now, the Exodus fiction had people swooning for Israel (even though it has to be the most boring epic film Hollywood ever made). Even Paul Newman’s good looks & Andy Williams crooning schmaltz couldn’t save it’s sorry ass. But the myth prevailed in propaganda form. Well that hasbara can now bend over & kiss it’s ass goodbye. The decades of vilifying & stereotyping Palestinians as terrorists & suicide bombers can bend over with it. The truth is out–bombed to smithereens &, one could even say, tweeted to death.

A new era is begun: the era of truth & justice & solidarity with Palestine; the era of calling the bantustate swindle what it is & fighting for a democratic secular state where Jews & Palestinians can live as brother & sister.

We are so sorry to our Palestinian brothers & sisters that we could not stay the hand of genocide & they have suffered so unbearably. But justice is on the march & “there aint no stoppin’ us now!”

All out for Gaza! Honor the economic boycott of Israeli products (barcode beginning 729)