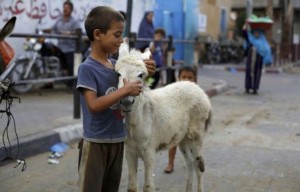 Remember this little guy? On July 17th I did a post about him that said: “In even the worst of human tragedies, there are always moments when human beings reveal the stardust we are born from. This little guy with his baby donkey is at the UN school in Beit Lahiya (north Gaza) where his family took refuge after evacuating their home. Even in hell holes, humans can make magic.”

On July 31st, Israeli tanks shelled the Beit Lahiya school injuring over 30 people, mostly women, sleeping children & infants. It’s unclear how many died. We don’t know what happened to this beautiful child. We only know that against this hell hole we must raise hell till justice is served.