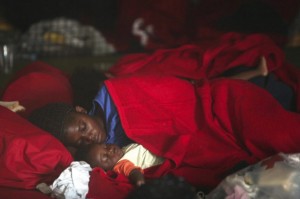 An African immigrant & her baby sleep in a refugee center in Tarifa, Cadiz, southern Spain. They were among the nearly 1,000 immigrants “rescued” from rafts in the Strait of Gibraltar on August 13th. “Rescued” is always a qualified term in immigration since many will be deported back to their own countries or just dumped back in north Africa.

Media portrayals of immigrants are being blown right out of the water by the realities on the Africa to Europe route & those on the US-Mexico border. Nearly 64,000 unaccompanied children from Central America have now entered the US since October. Obama regime officials try to associate them with prostitution & drug trafficking to hide from the rest of us they are victims of US plunder & military policies in their home countries. Thousands of unaccompanied children from Afghanistan & the Middle East attempt to enter Greece from Turkey & thousands attempt to enter South Africa from Zimbabwe & other countries. It may be mostly young men trying to scale the razor wire fence between Morocco & Melilla (Spanish territory in north Africa) but the makeshift boats carrying immigrants across the Mediterranean are filled with elderly, women, & children. That’s the true face of undocumented immigration.

Somehow in war, immigration, & urban politics, young men & boys have become the symbols of lawlessness & terrorism. When they’re shown together in groups we’re supposed to tremble at the specter of narco-gangs or paramilitary jihad. Truth of the matter is most of them just want to earn a living, live in peace, be treated with respect & have the US military & corporations get the hell out of their country or town. The criminal element among them tend to end up in government or as riot cops.

This photo is the Madonna & child of immigration. We offer them fullest solidarity (which means standing up for immigration rights in our own countries) & wish them Godspeed on their journey.

(Photo by A. Carrasco Ragel/EPA)