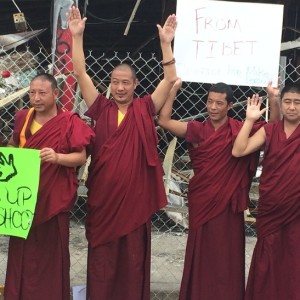 Hands up, don’t shoot!: Buddhist mob violence against Rohingya Muslims in Myanmar has been making international news for a while now because hundreds of Rohingyas have been massacred, thousands have had their homes burned down, & hundreds of thousands have been forced to flee for their lives to other countries. (Hundreds were drowned in the exodus, thousands were refused entry to other countries, & many survivors were sent back to Myanmar where anti-Muslim violence continues & includes non-Rohingya Muslims.)

Buddhism cannot be judged by politics in Myanmar. Many remember that in the 1960s Vietnamese Buddhists actively opposed the series of military juntas ruling South Vietnam & were prominent in opposing the US war against Vietnam. Their opposition helped counter anti-communist rhetoric used by the US to justify it’s barbaric war.

It only goes to show you theology has less to do with tyranny than the heritage of colonialism & the often misguided attempts to overcome it–or the accommodation modern regimes are making to neoliberal plunder in hopes of getting in on the take. Those regimes use religious intolerance to enflame sectarian conflict.

Buddhism is as Buddhism does–which is just as true of the Papacy. These Tibetan monks traveled from exile in India to stand with the Black community in Ferguson, Missouri. That placard reads: “From Tibet, Justice for Mike Brown.”