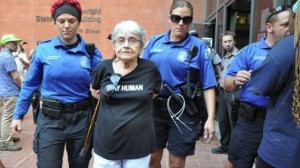 Can we just take a moment to salute Hedy Epstein, the 90-year-old holocaust survivor & long-time activist for Palestinian justice who was arrested yesterday in St. Louis, Missouri, at a protest against deploying the National Guard in Ferguson (a suburb of St. Louis)?

Epstein, who currently lives in St. Louis, has a long history of political activism going back to the 1930s, including antiwar & women’s rights. She plays an active & prominent role in Palestinian solidarity. She said at her arrest, “I’ve been doing this since I was a teenager. I didn’t think I would have to do it when I was 90. We need to stand up today so that people won’t have to do this when they’re 90.”

Hedy Epstein is everything you want to be when you’re 90: tough, inspired, & still fighting for social transformation without bending an inch to cynicism, demoralization, or the lame excuse that you’re too damn old.

Hats off to you Hedy!