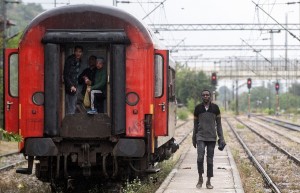 One of the land routes being walked by refugees from Africa & the Middle East is north from Greece to Hungary–about 700 miles (1,127 kilometers). They will have to get past the razor wire barrier wall Hungary built on the border with Serbia in the idiotic hopes of thwarting thousands of immigrants. These fellows are hitching a train traveling north from Gevgelija on the Macedonian-Greek border.

Modern immigration/refugee crises are tsunamic in proportion, with hundreds of thousands of people in movement. It’s regrettable there are only a handful of photojournalists to document the social history. Many historians don’t find working people interesting but those who have taken time to listen & report individual refugee stories have chronicled the extraordinary sacrifices of seemingly ordinary people to provide for their families; of unaccompanied children to reunite with parents who immigrated; of families to escape war, poverty, & tyranny. We don’t know the stories of these young men. We only wish them Godspeed on their journey.
Immigration is a human right. Open the borders!