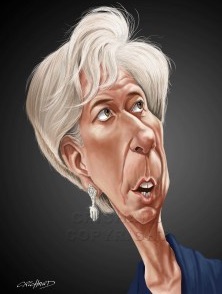 So it turns out Christine Lagarde, the IMF chief leading the austerity campaign against Greek working people (targeting pensions in particular), doesn’t pay taxes on her annual salary of $467,940 (£298,675) plus $83,760 additional allowance a year. Her benefits include rent subsidies, dependency allowances for spouses & children, education grants for school-age children, travel & shipping expenses, subsidized medical insurance, pay raises every July 1st. There’s no info on the salary & benefits of Angela Merkel, the EU agent of destruction in Greece, but her net worth is nearly $12 million.

Merkel & Lagarde are only two representatives of international capital putting the screws on working people–& not just in Greece. They’re not exactly what the women’s movement had in mind when it fought for female liberation. But they’re certainly proof positive that treachery is not a gender-based phenomenon.