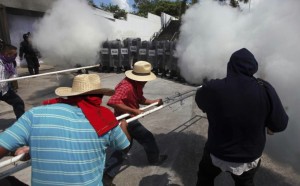 These teachers in Chilpancingo, the state capital of Guerrero state in Mexico, are battling riot cops in protest over the execution of six student teachers & the disappearance of 43 more on September 26th.

The Mexican government has 45,000 soldiers deployed who in the past several years have killed more than 60,000 civilians. Mexican military & paramilitary units & organized crime thugs have committed the most gruesome crimes against undocumented immigrants from Central America trying to get across Mexico to the US border. The US Pentagon bankrolls much of this carnage & has operatives on the ground in Mexico.

These teachers are up against mighty & violent social forces & superior military force invested in solidifying neoliberal economic & political tyranny in Mexico. As one of the most radical forces in Mexican politics, these activists are well aware of what they are up against. And yet they stand & fight.

We should honor them for their courage & know their tenacity combined with our international solidarity can vanquish the forces that seem so mighty. Our fullest respect & solidarity with them.