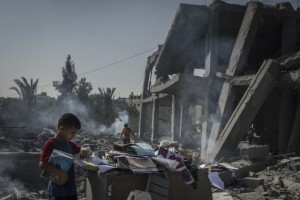 Mountains of cement rubble now mark what was once Gaza: its homes, schools, hospitals, mosques, playgrounds, university. Bereft Palestinians retrieve from rubble what little remains of their lives. This little boy is trying to retrieve books from the rubble of a mosque. Rescue crews still comb through shifting cement to retrieve bodies, hoping some will be found alive. When Israel’s tanks & bombers leave Gaza, the magnitude of psychic & physical survival is impossible to imagine.

This phase of Operation Ethnic Cleansing is part of–& an acceleration of–the economic blockade of Gaza (since 2007) where Israel allows in only measured amounts of calories per person, creating massive malnourishment; only limited amounts of medicine in a war zone when sewage facilities have been destroyed & diseases of all kinds will emerge & with people suffering massive injuries from shrapnel, burns, disfigurement. Israel bombed out the hospitals precisely to assure most would not survive. Israel embargoes building materials of all kinds, in particular cement. And when they bombed the smuggling tunnels on the Gaza-Egypt border, it was to make sure there was no possibility for humanitarian aid to enter or for Gaza to rebuild–creating massive homelessness. And still the UN sees no violations of international humanitarian law.

In short, we are witness to barbaric genocide where governments remain silent because they are complicit in the crimes. But we will not remain silent. Our international commitment to solidarity has only just begun. No man or woman of good will can stand aside. We need to build international collaboration to continue protesting the blockade & demanding sanctions against Israel for genocide; we need to organize humanitarian aid to Gaza; organize teach-ins, forums, speak-outs & have Palestinian speakers tour our cities to tell the truth. We will need to build the hell out of the economic & cultural boycott of Israel. We need to do everything in our power to stop the genocide.

We have the daunting task of exposing the Exodus script as propaganda & replacing it with the truth of Palestinian justice. Many lauded the late arrival of Latin American government officials to the revolution, who took nearly three weeks to make a wimply diplomatic gesture of recalling ambassadors. Wimpy doesn’t cut it in a genocide. We need an international campaign to demand these governments sever all economic ties with Israel & use their massive resources to mobilize humanitarian aid for Gaza.

When we speak of humanitarian aid, we mean food, medicines, toiletries, appliances, books, clothing–& yes, cement & steel. But the biggest humanitarian aid of all will be to continue massive mobilizations demanding “Stop the massacre in Gaza!” “End the blockade of Gaza!”