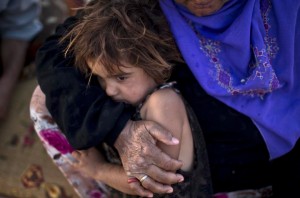 Perhaps in the massive movements of refugees & immigrants around the world we can overlook the overwhelming emotions caused by dislocation & uncertainty, by the immense losses involved. Humans just aren’t suited well for war. We’re not suited well for suffering.

Four-year-old Syrian refugee Amal held by her grandmother Halima Ali allows us for a moment to glimpse the unbearable they endure. They’re in a tented refugee camp near the Syrian border on the outskirts of Mafraq, Jordan where there are already long-established Palestinian refugee camps from the 1948 & 1967 expulsions from Palestine.

Our fullest solidarity with refugees & immigrants all over the world.