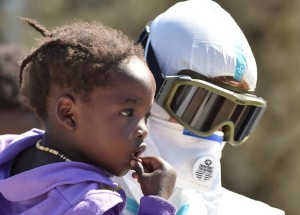 In April, the European Union & its immigration thug squad named Frontex, launched a military operation named Operation Triton against African refugees crossing from Libya to Italy. It was announced that 26 nations sent warships into the Mediterranean to patrol (ostensibly) against “human traffickers.” Triton is a military operation; it does not have a search & rescue mandate. Frigates & destroyers are not suited for rescuing people from dinghies in the open sea & reportedly only Britain deployed an amphibious ship that could serve for rescue.

The classified plan approved by EU member states was released by WikiLeaks in May. Triton was to be deployed against refugee transport networks & infrastructure, including the destruction of docked boats, interdiction & confiscation of en route boats, & operations within Libyan territory.

The UN mandate for Triton requested by the EU was tabled because association with such an open-ended military operation was getting hairy for the UN. Any military operation against a small number of boat owners & traffickers would really be directed against the refugees–to stop their movement, including just getting on the boats, which would likely entail death & injury to many.

The scope of the maritime mandate was also undefined–signifying not uncertainty about what Frontex intended to do in the open seas but that it wasn’t sure what it could get away with without condemnation. After all, you can’t just torpedo dinghies with children, elderly, infirm, & pregnant women on board in the middle of a sea.

After five months of Triton, there is almost no word on what 26 European navies are doing in the Mediterranean with their warships. What we are seeing reported is images like this one–of rescue workers, usually from the same Irish navy vessel, holding infants & small children rescued from mid-sea. We were told yesterday the Italian coast guard claims it coordinated the rescue of 4,400 refugees in a single day.

Has Triton changed its mission from military to search & rescue? Or are we being played here? Are we being fed a bill of goods about what is really going on? Because as we know from the Greek-Macedonia border, Frontex has no intention of allowing sanctuary to tens of thousands of refugees & immigrants.