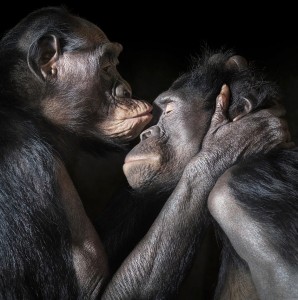 And some say animals have no emotions!? This is Diatou (on the left) & Cheka, a pair of bonobos, a species from the Congo basin in central Africa.

(Just to be clear, this is not the species most politicians & bankers evolved from. That species went extinct from warfare & lack of cooperation. Only their most wretched remained. Thus the likes of Modi, the US Congress & Supreme Court, Netanyahu, Obama, Clinton, Cameron, Phil Windsor, Merkel, Lagarde. You get the picture.)

(Photo by Tim Flach, a UK photographer, exhibiting a series of his animal portraits at the Retina Scottish International Photography Festival, Edinburgh)