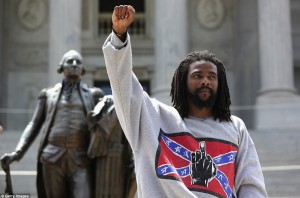 A Ku Klux Klan chapter from North Carolina rallied their forces for a rally at the South Carolina capital in defense of the Confederate flag. All 35 of them showed up bearing their ugly-assed flag, white supremacist & Nazi insignias & shouting racist insults at the counter-rally of 2,000 activists gathered across the street.

The people who got the permit for the counter-rally were reportedly from the Florida group Black Educators for Justice, which media sources immediately linked to the New Black Panther Party (NBPP). Media reports claim participants at the rally included NBPP members as well as activists from Black Lawyers for Justice & the Nation of Islam (NOI). This identification is supposed to set off red alerts for us since both the NBPP & NOI have been identified as hate groups by the Southern Poverty Law Center (SPLC).

This is not a new problem in the Black nationalist movement. It has long been an issue in the Nation of Islam, including under Louis Farrakhan. It was an issue during Malcolm X’s tenure in the NOI & has led many to charge him with antisemitism.

As the BlackLivesMatter movement grows, there will be many young activists looking for a radical alternative to the old conservative civil rights groups. Many will be drawn to groups that espouse antisemitic views. That is no reason to declare them all haters or their groups as hate groups & try to shun them out of politics. That is a failed strategy of the SPLC–perhaps more related to their relationship to Israel than their commitment to Black justice. Would they have declared Malcolm X a hater? Likely.

Antisemitism is social hatred & it’s a problem wherever it rears its ugly ass. There’s no reason to be accommodating; there is no political merit to pretend there’s good reasons for it among Black activists. It weakens the Black movement & Palestinian solidarity in one fell swoop. But instead of declaring them political pariahs like SPLC does, it is necessary to take them on politically & forcefully to persuade young activists that social hatreds of any kind have no place in the civil rights & Black power movement. Historic movements for human freedom & justice have no place for prejudice.

We wish media were merely reporting the truth & not issuing a warning against support. Our fullest solidarity with the rally yesterday. When activists do what’s necessary, we stand with them.

(Photo of activist at counter-rally in Columbia, SC by Getty Images)