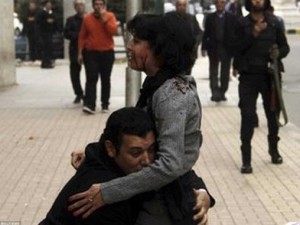 Who can keep track of all the trials & retrials of Hosni Mubarak, the former military dictator of Egypt? He’s got one case going for corruption & another for murdering protesters. There isn’t much point in monitoring cause we’re looking at a done deal. Not to mention a mockery of justice. He’s gonna walk. The Egyptian appeals court opening tomorrow will uphold the lower court ruling to drop all charges against him for murdering protesters in the 2011 uprising that overthrew him. No need to play Nostradamus or lay odds with a bookie.

Most people wonder why the military regime is putting on such a spectacle of legitimacy. Legal farce has never troubled them before. They recently ruled the police murder of protester Shaimaa al-Sabbagh (January 2015) by birdshot pellets that pierced her lungs & heart was because she was too skinny. The forensics official said on television that ‘according to science, she should not have died’ & that made her death a fluke, not a crime.

Some media coverage of Mubarak’s trials make better parody than analysis. Without skepticism, one quoted a public prosecutor who said “A study of the reasons for the ruling revealed legal flaws that tinged the judgment.” Anyone with half a brain knew the case would be constructed to allow Mubarak to eventually walk on technicalities. Just like the prosecution is doing in Baltimore.

Another report said this dog & pony show of legality & appeals “is an integral part of the legal process in Egypt.” Who knew military dictatorship had a legal process!? Could somebody let General Sisi know? A reporter in the Huntington Post said dropping charges against Mubarak for murder is “raising fears among human rights activists that the old guard was making a comeback.” You think!?

Mubarak will walk away from all corruption & murder charges & he’ll start hanging at swanky parties again with General Sisi, who served the Mubarak regime in the military. But he cannot walk away from condemnation for the murder of democracy activists, for beating, raping, torturing, incarcerating thousands. The world knows what he is & that will be more than written in posterity; it will eventually fuel a new Egyptian uprising against tyranny.

This photo is the moment of the murder of Shaimaa al-Sabbagh, a martyr of the Egyptian revolution. We honor her & all those who died. We don’t need a kangaroo court to determine justice.