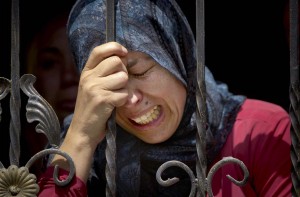 The media caption to this April 28th photo read simply: “A woman cries at the funeral of Mohammed Yehya, who died while fighting with Israeli troops in the West Bank city of Jenin.” The brevity covers a multitude of lies.

A canned Associated Press (AP) article circulated in several media sources explained that 18-year-old Yehya died at a hospital in Nablus (in the West Bank) after being shot in the abdomen for hurling rocks at Israeli troops. The article accepted the Israeli military’s claim that they saw a group of Palestinians “trying to breech the security fence of a West Bank settlement & called on them to desist.” When they did not, soldiers “opened fire on them”, shooting toward their lower extremities. The military also claimed that over the weekend, Palestinians carried out three separate attacks against “Israeli police” & two knife-wielding attackers were shot dead.

Now let’s hear the real story, beginning with who the grieving woman is–namely Mohammed Yehya’s mother. Yehya & his family were preparing for the wedding of his older brother & were hosting relatives from Jordan visiting for the ceremony. The family group all went to visit family land near the apartheid barrier wall in the village of Al Araqa which had been divided by Israel to build the wall. Israeli soldiers objected to their presence & ordered them to leave.

Witnesses say before they had a chance to leave, a soldier shot Yehya point-blank in the abdomen. Or as the Israeli military admitted, “opened fire on them.” Even if the group gave the soldiers lip, there is no conceivable justification for shooting Yehya since he was not throwing rocks at them. Or even if he was throwing rocks at them.

Israeli soldiers arrested two of his Jordanian relatives & obstructed an ambulance for over half an hour trying to take Yehya, who was bleeding profusely. He was eventually taken to a Jenin hospital where doctors determined he required surgery they could not provide. They requested permission to transfer him to Israel for treatment but when denied entry permits transferred him in critical condition to a hospital in Nablus, twenty miles away on a road with checkpoints, where he died.

Yehya was the third Palestinian man gunned down last week by Israeli soldiers. Another was a young man in East Jerusalem and one in Hebron. Al Araqa, East Jerusalem, & Hebron are occupied territories, not the jurisdiction of Israeli police, as AP reported. Media can’t even get that straight.

The murder of these three young men is part of a general crack-down in the West Bank including overnight raids on dozens of houses, Israeli troops storming into homes & violently searching them, causing excessive property damage, & arresting dozens of Palestinians in a dragnet. According to one human rights group, Israeli troops shot seven Palestinians & arrested at least 375 others (including 55 children & 19 women) just last month. In that time they also abducted eleven Palestinians from Gaza.

More than 7,000 Palestinians are being held in 17 Israeli prisons & detention camps. Of these, 540 Palestinians are held under administrative detention which means imprisonment without trial or formal charges & allows Israel to incarcerate Palestinians indefinitely. It not only violates due process & the Geneva Accord about rules of occupation; it violates so many international laws the UN should be jumping up & down like monkeys instead of standing mute as a dumbbell.

Build the economic & cultural boycott of Israel to defend Palestinians from the barbarism of Israeli apartheid & ethnic cleansing. May our brother Mohammed RIP.