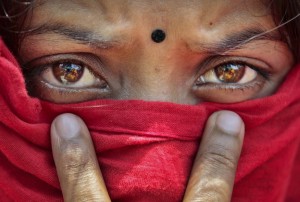 This woman from Dhaka, Bangladesh is a garment worker protesting with a few hundred others outside the offices of the Bangladesh Garment Manufacturers & Export Association–the trade association that brokers sweatshops for retailers in the US, Europe, & Japan. They’re protesting because Swan garment factory–a Hong Kong manufacturer that operated for decades in Bangladesh & boasts of millions of dollars in sales–closed down their operation & skipped town still owing workers back wages. The protesters are also demanding the factory be re-opened.

Their demand for the factory to be re-opened does not for one moment legitimize the mountains of enthusiastic rubbish & panegyrics written in defense of sweatshops by the unsavory likes of Paul Krugman, Nicholas Kristof, Jeffrey Sachs, Alex Massie, & Matt Yglesias. You wouldn’t know it from their writings, but they’re not all halfwits. With them, it’s not another case of privilege makes you stupid but of being paid big bucks to create an ideological defense for neoliberal plunder & exploitation. They put on a mask of humanitarian concern to justify barbarism but they use the exact same arguments to justify child labor (which is part & parcel of the sweatshop system). Let’s be frank; their arguments rest on the stinking edifice of racism.

Their odes written to sweatshops are monstrous, with titles like “In Praise of the Maligned Sweatshop,” “In Praise of Cheap Labor,” “Two Cheers for Sweatshops.” This kind of crap from men who wear $200 silk underwear over their pompous, ugly butts! And they continue to pour that stuff out as grieving families recover the bodies of their beloved from garment factory fires & building collapses.

These boneheaded, amoral apologists arrogantly drool all over themselves to make working people unable or unwilling to consider the options. Anti-sweatshop activists are not demanding the closing of factories. We are not (at least those outside “Buy America” labor unions) so xenophobic as to demand the jobs be brought back for union workers. What we demand is the same standards of wages, safety & working conditions for workers around the world as we want for ourselves–& increasingly no longer have. That’s what “an injury to one is an injury to all” is all about.

We want there to be no havens on this planet for human exploitation. Neoliberalism can’t provide that because its very nature is violence & barbarism. There’ll be some scuffles on the way to eliminating sweatshops. We can call them revolutions. But if humanity is to survive & human life be cherished, neoliberalism has to go.

Our fullest solidarity with this woman & the other protesters in Dhaka–& with all sweatshop workers around the world.