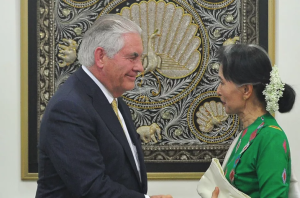 Media has portrayed Secretary of State Rex Tillerson as a hapless fellow at the mercy of Trump because he looks like a bobble-headed parody of the Pillsbury Doughboy. But he is genuinely pleased here to meet Aung San Suu Kyi because in fact they are kindred spirits. Before Trump appointed him Secretary of State, Tillerson was a top officer in the Exxon Mobil corporation for four decades. According to Alaska state officials, Tillerson has been involved in oil exploration in the state since 1985. He was not directly implicated in the 1989 Exxon Valdez spill of 257,000 barrels of crude oil off the coast of Alaska, considered one of the worst oil spills in the US. But he was the chief executive officer of the company during the legal wrangling where the US Supreme Court reduced punitive damages because the accident (caused by Exxon’s lack of maintenance on safety procedures) was “worse than negligent but less than malicious.” So much for corporate or judicial responsibility.

Tillerson was also not in charge of Exxon Mobil operations in the Aceh province of Indonesia when the company hired the Indonesian military to provide security for their gas operations. A civil suit filed in a US court in 2001 alleged that Indonesian military security services involved “genocide, murder, torture, crimes against humanity, sexual violence, & kidnapping.” The plaintiffs claimed Exxon Mobil was aware of the character of the security services & refused to take action to stop them. That’s called collusion. The US State Department under George Bush asked a federal judge to dismiss the suit. Under Tillerson’s tenure as chief executive officer, Exxon Mobil continued to press for dismissal of the case.

Tillerson’s involvement in human rights crimes have carried into his tenure as Secretary of State because he is hopelessly amoral. The 2008 US Child Soldiers Prevention Act requires the State Department to publish an annual list of countries enlisting children under the age of 18 as soldiers. Being on the list makes a country ineligible for US military training, financing, & weapons. In June of this year, despite State Department documentation to the contrary, Tillerson removed Burma, Iraq, & Afghanistan from the list. The three countries had been included on the original list compiled by senior State Department officials responsible for compliance oversight in those countries. They were removed by Tillerson–probably in consultation with the Pentagon. When a group of State Department officials formally accused Tillerson of violating the Child Soldiers Prevention Act, Tillerson acknowledged that the three countries did use child soldiers. But he said it was diplomatically necessary to distinguish between governments “making little or no effort” to end conscription of children & those “making sincere, if as yet incomplete efforts.” What Tillerson means is that the conscription of children as soldiers is of no concern to him or to the Pentagon because the governments of those three countries have a military value to the US.

It’s not certain if Tillerson’s violation of the Child Soldiers Prevention Act can be litigated since the act includes a presidential exemption. When it comes to amorality & human rights crimes, Tillerson beats in sync with the halfwit in the White House.

Photo is the bobble-head meeting last week with Suu Kyi.