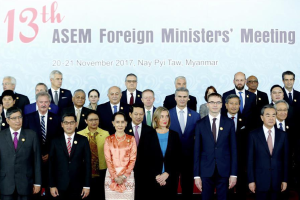 In October, the NY Times published an article titled “Hands Tied by Old Hope, Diplomats in Myanmar Stay Silent” laying out why foreign diplomats based in Burma refuse to speak out against the genocide of the Rohingya people. According to the article, it’s a diplomatic strategy & nothing so venal as protecting commercial & military investments in Burma. The rationales offered were politically banal–such as Suu Kyi’s obduracy in the face of criticism–but the corker was when the article cited David Scott Mathieson, a researcher on Burma for Human Rights Watch who in December 2016 moved to Yangon to become an apologist for Suu Kyi. Previously, he showed what a rotter he is by trying to discredit Rohingya Blogger & Rohingya Vision, two of the best international sources of news about the Rohingya struggle. Mathieson, who works that fictional dichotomy between the military & Suu Kyi, said junta strategy is to let Suu Kyi take all the criticism & sustain international shaming & disgrace so they can carry on unobstructed against the Rohingya. Propaganda doesn’t get more sorry-assed than that.

Before diplomatic silence against the genocide became any more deafening, 54 Asian & European foreign ministers laid their cards on the table about where they stand when they met at the 13th Asia-Europe Meeting (ASEM) on November 20th to 21st in Nay Pyi Taw, the political capital of Burma. That the Burmese military is still engaged in its murderous campaign against the Rohingya people, driving almost a million into exile, did not deter high-ranking officials of the European Union, senior officials from every one of the 28 members of the EU, all 10 members of the Association of Southeast Asian Nations (ASEAN), Australia, China, Cyprus, India, Japan, South Korea, Russia, New Zealand, Mongolia, Bangladesh, Kazakhstan, Pakistan.

The officials agreed not to discuss the genocide but to focus on how to ‘combat terrorism & violent extremism’ & the misuse of social media to spread them. Diplomats only know how to talk through their rear ends so their lies require interpretation. What the ASEM diplomats mean is that what the junta does to the Rohingya people is of no consequence at all compared to the billions their countries have invested in Burma’s neoliberal gold rush & what those who sell arms to Burma also have invested in the genocide. To protect those investments, the diplomatic mission is sucking up to Suu Kyi & the generals by meeting in Burma while the military is in the heat of genocide.

Ending the ‘final solution’ against the Rohingya people requires massive, active international solidarity–meaning political pressure on our own governments to provide humanitarian aid to refugees & asylum with full refugee rights.

Photo is partial group shot of the ASEM officials who should all be bounced from office & prosecuted for collusion in genocide. To Suu Kyi’s left is Federica Mogherini, an Italian politician & high-ranking official in the EU.