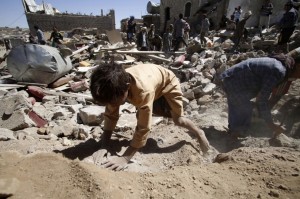 The reality today is that this photo could be from any number of places: Syria, Gaza, Somalia, Yemen, Afghanistan, Iraq. In fact, it’s from Sana’a, Yemen where we watch the magnificent Yemen uprising in 2011 now being bombed to smithereens. Repression will follow the bombing.

The small boy is digging through the rubble of houses destroyed by days of bombing by warplanes from Saudi Arabia, Egypt, Morocco, Jordan, Sudan, Kuwait, Qatar, Bahrain, & the United Arab Emirates, with “logistical support” from Somalia, Pakistan, & the US. Somalia doesn’t even have an independent, functioning government after years of US bombing & military intervention. So who in Somalia declared war against Yemen?

What does George Clooney have to say about Sudan joining the “Bombing for Democracy” coalition after all his war-mongering about Sudan’s genocide in Darfur? Don’t Mia Farrow & that creepy little Ronan Farrow have anything to say about Sudan being accepted in a respectable bombing mission?

Seven feudal kleptocrats & a military dictatorship bombing democracy into Yemen. Even Hollywood couldn’t sell that script. According to the media caption, the coalition of belligerent nations are “mostly Sunni Arab countries”–as if religion had a damn thing to do with it or they had a clue what the difference between Sunni & Shi’a is in theology or politics.

The military aggression against Yemen has nothing to do with democracy & everything to do with destroying the last vestiges of social rebellion seen in the 2011 uprising. So what does Tawakkol Karman, the 2011 Nobel Peace Prize winner from Yemen, have to say about the bombing? After receiving the honorific, she reportedly worked tirelessly lobbying the UN & US for a democratic transition in Yemen. Was all that for naught? The US is providing what they euphemistically call “logistical support” (really direct involvement) & the UN is doing its usual: wringing its hands about the number of civilian deaths from bombing densely populated areas, “raising concerns about compliance with international law,” warning timidly about possible war crimes, but refusing to denounce the bombing of Yemen. None of that is Karman’s fault of course but it would be valuable to know where she stands.

US out of Yemen! No support of any kind to aggression against the people of Yemen!