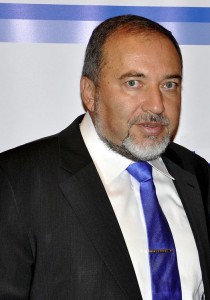 It’s not a good sign that Israel’s politicians are deranged & don’t try to hide it anymore. It’s the nature of Zionist ideology to produce whack jobs but after 67 years of ethnic cleansing with the full collusion of the US & most other world regimes, they think they can say & get away with anything. Is the fraying of that Exodus myth & the massive growth of BDS driving them over the edge or do they just not know that a new day has dawned?

This glassy-eyed guy is Avigdor Lieberman, Israel’s current Minister of Foreign Affairs. He’s a Soviet Jew from Moldova who moved to Israel in 1978 at the age of 20 & now lives in Nokdim, a settlement in the West Bank near Bethlehem built on Palestinian land. He has had a long career as a politician despite investigations for accepting bribes, corruption, & fishy business dealings. He also has anger management problems & assaulted a 12-year-old kid in Nokdim who allegedly hit his son.

He’s considered a polarizing figure in Israeli politics which he seems to take great pride in, saying “I’ve always been controversial because I offer new ideas. For me to be controversial, I think this is positive.” Some of those new ideas include bombing the Aswan Dam because Egypt once supported Yasser Arafat; executing Palestinian members of the Knesset as “terror collaborators”; drowning Palestinian prisoners in the Dead Sea “since that’s the lowest point in the world”; the execution of Palestinian prisoners in Israeli jails; a nuclear strike on Gaza; opposing any peace agreement with Palestinians “that will allow the return of even one Palestinian refugee to Israel.” So speaketh the schnook from the Moldavian Soviet Socialist Republic.

On Sunday, when he spoke at a conference on a college in Israel he said about Palestinian citizens of Israel: “Whoever is with us should get everything. Whoever is against us, there’s nothing else to do. We have to lift up an axe & remove his head, otherwise we won’t survive here.” The latest of his new ideas then is to behead Palestinians who oppose the Jewish-only state.

With politicians like this Israel doesn’t need enemies. He’s evidence for the moral, spiritual, & political dry-rot that is Zionist ideology.
Build the economic & cultural boycott of Israel. Demand no aid of any kind to Israel.