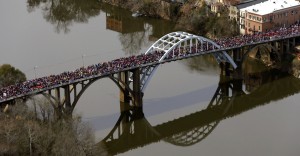 This is an aerial shot of the thousands of civil rights activists who marched last Sunday across the Edmund Pettus Bridge in Selma, Alabama to celebrate the 50th anniversary of the historic civil rights march in 1965 which was attacked by state troopers & deputized goon squads. The media caption called this protest a “symbolic walk.” Just like the power brokers try to turn International Women’s Day into a cultural love-fest of “stiletto runs” instead of social protest, they’re trying to turn the erupting civil rights movement into a symbolic stroll.

It was certainly symbolic on the part of Obama & the 100 politicians who led it off because they have all been mute for years in response to the police murders of hundreds & massive incarceration of thousands of Black kids for minor offenses. But thousands walked that bridge on Sunday as a declaration that the struggle against racist oppression is on again. Just like the hundreds of activists who jammed the state capitol in Madison, Wisconsin after the March 6th police murder of Tony Robinson, a 19-year-old unarmed Black teen.

The original Selma march focused on the disenfranchisement of Blacks & led to the Voting Rights Act of 1965–which a 2013 Supreme Court ruling just gutted, leading to all sorts of state initiatives to deny Blacks & Latinos voting rights. You don’t have to have an ounce of respect for either of the two US capitalist parties to know that the denial of voting rights is an important political battle & an outrageous flouting of the Bill of Rights.

All throughout the US, but particularly in the South, there are monuments to the Confederacy & white supremacy. The historian James Loewen wrote a popular history, “Lies My Teacher Told Me” (1995) which exposes how Blacks, Latinos, & Native Americans are simply written out of US history in school textbooks. He also wrote a sequel, “Lies Across America” (1999) which describes those Confederate monuments, many built at the turn of the 20th century after the 1890 ruling establishing Jim Crow (US apartheid) in the South. It was the era of the lynch mobs where hundreds of Black men & women were hung.

The Edmund Pettus Bridge is not mentioned in his book but it is named after a supporter of slavery & Confederate general during the US Civil War (1861-65). Earlier he had served as a volunteer in the Mexican-American War (1847-49) which wrested most of the Western US from Mexico. After that war, he moved to California to participate in death squads against Native Americans. When he retired from his marauding & mayhem adventures, he became a Grand Dragon of the Alabama Ku Klux Klan & a US Democratic Party senator. He died in 1907 (& not a moment too soon). May he rot in peace.

The bridge was constructed & named after him in 1940 when Jim Crow ruled the South by Alabama legislators who certainly knew what he was all about & were making it a monument to white supremacy. Commemoration marches of the 1965 march are held every year at the bridge & there is great historic irony that this monstrous tribute to racism & social hatred has become the venue for the struggle against it. Whether the bridge is ever renamed is for Black civil rights activists to decide. But we can all savor what the corpse of old Pettus would do if he knew history would exact revenge on his rancid legacy.