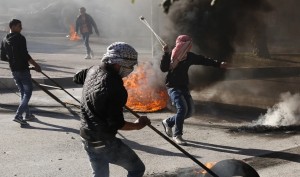 The Guardian-UK is masterful in using brief captions on photos to tell mouthfuls of lies about Palestinians & Israel. This one is a lulu. It reads: “A Palestinian protester uses a slingshot to hurl stones during clashes with Israeli soldiers in the West Bank city of Hebron.” No big deal that. But here’s the kicker. They added: “In the West Bank’s most troubled city & its peripheral villages, these familiar clashes are part of a continuing cycle of violence.”

“A continuing cycle of violence,” but no mention of the illegal occupation by Israeli troops; the growing settlements & aggressive settlers from all over Kingdom Come who feel entitled to Palestinian land; the apartheid conditions in Hebron, partially under direct military control–with curfews & restrictions on movement for Palestinians; nor mention of the demolition orders for those “peripheral villages.”

Looks like that “stabbing Intifada” rubbish is running out of steam for lack of evidence & because it’s such brazen nonsense the media can’t sustain the narrative without exposing themselves to ridicule.

These are urgent times for Palestinian solidarity. Just because the current Israeli pogrom is not receiving news coverage doesn’t mean it’s abated. Media just needed space to beat the drums of war.