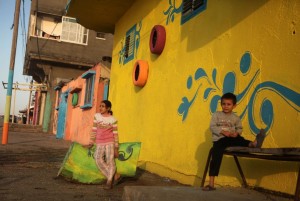 We live in grim times–& it’s not coincidental that the horrors commenced & coincide with the emergence of capitalism whose creativity is now absorbed in the development of scams & the weapons of mass destruction.

The world can become too much with us & the odds against human civilization seem overwhelming. Many become not so much demoralized as exhausted by war & what often appears to be a collapse of human society. Bombers everywhere & ISIS too.

Cynics & misanthropes claim we’ve reached the end of times but their’s is the philosophy of defeatists & conformists to the status quo. Human beings aren’t asked to take on the whole world of human misery but only to play a part in social transformation so that society serves human & animal life–& to do that as intelligently as we can.

The human race is a marvelous species–filled with music, art, poetry, magic, & laughter. We express that inner beauty in the worst of times & in the most unlikely places. Because our magic will be out & because we need it to make sense of our world.

This is a photo from Al-Shati refugee camp in Gaza. Al-Shati was established in 1948 for Palestinians fleeing Zionist paramilitary terrorist squads. Today nearly 88,000 refugees live there–nearly 10,000 unregistered & denied UN refugee benefits. The camp was bombed during Israel’s carpet bombing siege in 2014. In one strike, 8 children were killed. It’s a grim place for children to come of age in. But this photo shows one of the murals in an art project where over 30 artists created wall murals in the camp. Human beings need art not only to unravel the meaning of oppression but to formulate resistance to it.