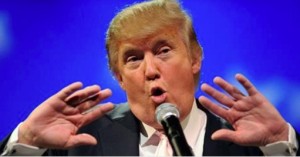 Trump (& for that matter, Ben Carson) has moved way past buffoonery in his rhetoric. Now he’s talking the language of fascism with calls for special databases & ID tags for Muslims & imbecilic claims he saw thousands of Arabs in New Jersey cheering on the fall of the World Trade Center on 9/11. He justified an assault by his supporters on a Black activist & continues his outrageous rants against immigrants & refugees. He’s become an outright danger to US democracy.

Then we have Clinton falling all over herself for Israeli apartheid & Zionist money–even equating ISIS to Hamas when she would more accurately equate ISIS to Saudi Arabia, the staunch US ally who also beheads people. Whatever will the lesser evil voters do when she becomes the candidate?

However did US democracy come to this? But of course that’s almost a stupid question since the US is founded on colonialism, bred to racism & white supremacy. Its wealth is based on militarism.

The beginning of undoing all this is rebuilding the antiwar movement. But it means eventually dismantling the entire edifice on which this country is based. Zionists freak when it’s suggested Israel as a theocracy must be dismantled & replaced with a democratic secular state. Name a country–beginning with the US–where dismantling what exists is not essential if humanity wants to survive the predations of neoliberalism, the barbaric phase of capitalism.

(Photo is Trump talking through his ass)