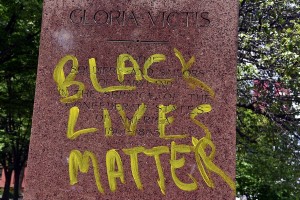 In the US, the Confederate flag isn’t just a symbol & the furor over flying it at government buildings is not a distraction from more important civil rights matters like opposing violence against the Black community. The ugly-assed thing has gone through several designs with a preoccupation that it not appear a symbol of truce with Black equality. The reason the damn thing matters is because it is the banner & battle cry of white supremacy which refuses to not only acknowledge defeat in the Civil War but in the ongoing battles for democracy & equality for Blacks.

South Carolina’s politicians are blithering now about how it’s time to remove the flag but they’ve put a legislative process in place against such political eventualities. When the heat over the racist murders of nine people dies down, so will the blitherings & all attempts to remove the flag. The same goes for retailers like Walmart, Sears, eBay, & Amazon which say they’ll remove it from sale. Just till the heat dies down, because for white supremacists it’s now become a hot item & still the symbol of defiance.

And that doesn’t even address the other states that wave the thing or incorporate it into their state flags & license plates–or the hundreds of Confederate monuments all over the South & throughout the US. These monuments are maintained at great expense by organizations like the Daughters of the Confederacy & Sons of Confederate Veterans. The monuments aren’t just intended as shrines or even just gestures of contempt but are part of the ongoing campaigns against Black equality. These creeps are committed to white supremacy.

Protests going on to remove the flag are part of the civil rights & Black power struggle–lest in the future we have to face storm troopers carrying the ugly-assed thing in the streets. We should defeat it now while it’s still just hanging like a piece of stinking, dead, fly-infested meat on a flag pole.