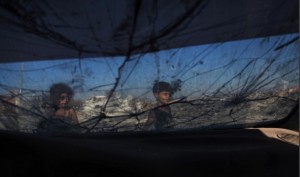 The Boycott, Divestment, & Sanction movement (BDS) called by Palestinian groups against Israel has played an indispensable role in educating about the conflict & building Palestinian solidarity. But who could have imagined how BDS would expose the fault lines of neoliberalism & the deep connections of Zionism to neoliberalism?

That political connection is not just an affinity, but a political interpenetration going back to the inception of Zionism (in the 19th century). A movement emerged to oppose pogroms & persecution of Jews but it was based on supremacist views & it collaborated with & adopted the political methods of colonial powers like England. The die was cast; there was nowhere to go politically that could overcome such corrupt origins.

It’s disheartening to see the role Zionists play in anti-immigration, eugenics programs, even in feminism where they are pro-militarist for Islamophobic reasons. It’s not because all Zionists are inherently reactionary. It’s the deadly combination of supremacy, elitism, & the quid pro quo of the original Mephistophelean bargain that ties it into the very functioning of neoliberal politics.

The growth of BDS on campuses around the world has exposed the nexus between Zionism & neoliberalism. There are increasing attempts, most notably in Australia, the UK, Canada, & US, to brand & outlaw BDS activities & criticisms of Israel as antisemitism. There are also legislative initiatives in several US states. The most prominent campus initiative now is from Janet Napolitano, formerly US Secretary of Homeland Security & now president of the University of California system. She is campaigning for the UC system to adopt the US State Department’s definition of antisemitism which includes criticism of Israel. The campaign has gone on for a few years now since Zionist groups appear to be targeting the UC system to test out their strategy of criminalizing any criticism of Israel.

The State Department’s definition is cribbed almost wholesale from a definition cooked up in 2005 by Zionist ideologues for the Fundamental Rights Agency (FRA) of the European Union (EU). It’s not an official EU definition though Israel & its supporters tout it as such. It includes “demonizing,” “delegitimizing,” & “applying a double-standard to the state of Israel.” It’s a complete affront to the Bill of Rights & freedom of speech. We can criticize our own government but if we sneeze in the direction of Israel, we’re cooked & will be penalized in some unspecified way!? But of course, once criticizing Israel is outlawed, all criticism of the US will be outlawed right after.

As ludicrous as it is, it is also a serious political attack, not just on BDS & Palestinian solidarity, but on civil liberties. We have to ask why criticizing & exposing Israeli apartheid is so pivotal in world politics? And we can eliminate any concern for the welfare of Jews in the considerations. The regimes pushing this stuff don’t care any more about Jews than they do about the African & Middle Eastern refugees drowning in the Mediterranean Sea or the Rohingya adrift & starving in the Andaman Sea.

Israel serves a purpose in international politics. It’s a military fortress in the Middle East to maintain US & European control. It functions like the repressive regimes in Saudi Arabia, Jordan, & Bahrain & the military junta in Egypt–as bulwarks against democracy. The US can militarize Israel up to its eyeballs but that is not security for Jews; it’s a death trap, as anti-Zionist opponents of Israel have always warned.

That’s what makes the Palestinian struggle so historic, so momentous, so vital to win. Their struggle represents the forces for democracy in the Middle East. That’s what makes BDS so important for them to defeat. When Obama chides Netanyahu or when Netanyahu gets lippy with Obama, it doesn’t represent a new strategic orientation of the US. Netanyahu knows damn well the US will not pull the plug on military equipment because Israel is pivotal to neoliberal prospects in the region.

These are Palestinian children in Gaza City playing in the rubble of buildings destroyed in Operation Ethnic Cleansing last summer. The US supplied the weapons to destroy Gaza, it is part of making sure Gaza is not rebuilt, it is a party to Israeli apartheid & ethnic cleansing because Israel serves its economic & political interests.

When the US & other regimes tie BDS to civil liberties, they expose a neoliberal fault line. There’s no reason in the world to panic. But there is every reason to commit ourselves to building BDS & to educating & broadening support for Palestinians.