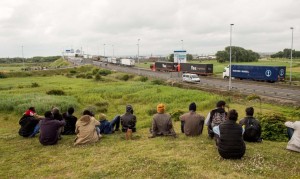 This is a group of immigrants in Calais, France near the highway accessing the Channel Tunnel to England where there is a lot of commercial traffic they can hitchhike or stowaway on. The UK foreign office has warned drivers against stowaways but if international solidarity were what it should be, the drivers would be piling them into their lorries.

These immigrants are thus far among the lucky ones who survived crossing the Mediterranean without drowning, managed to evade border patrols & cross the Italian-French border, & escaped the EU naval operations against immigrants that began yesterday. We wish them Godspeed on their journey.

Imagine if all the creativity, tenacity, & organizational brilliance that got them from African & Middle Eastern countries to Calais could be used not for survival but to build a humane world, to address child labor, mass starvation, sweatshops, environmental plunder, inequalities, social divisions & hatreds of every kind. We might not be coming up close on Utopia yet but national borders dividing & isolating peoples from each other would be thought historic monstrosities & school children will study them as historic crimes, marveling at the ancestral foolishness.