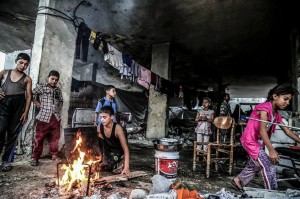 Since Israel ended the latest phase of Operation Ethnic Cleansing on August 26th Gaza hasn’t been much in the news. Israel has a lot of territory to recover to get a leg back up on that Exodus baloney–the Zionist version of “Climb Every Mountain”– because although psycho Zionists were not squeamish about ethnic cleansing, most people around the world were completely horrified & traumatized.

Media is doing it’s part by not reporting on recovery in Gaza & publishing nonsense like the op-ed in the LA Times titled “How do Israelis cope?” about the recovery in Israel. It was written by a US Zionist who settled in Israel & is quite accomplished at talking through his ass. There’s no need to belittle the trauma that affected many Israelis (especially those being attacked by goon squads & cops for protesting the war), but there’s no need to over-dramatize or exaggerate it either. It was after all Zionist media who at the height of the siege published articles like the psycho settler asking if ‘this war would make her fat’. There were dozens of photos of Israelis watching ethnic cleansing in Gaza like a spectator sport & cheering it on. So cut the crap!

One Guardian UK reporter said the psychos cheering genocide at Sderot should be understood “in context” because the children of Sderot were hovering in bomb shelters. Does that make sense? Did the parents leave their kids in bomb shelters & head for the parlors in the hills where they could take a front row seat to carnage? Because then we’re not talking “context”; we’re talking double-whammy psychosis. “In context” is the same kind of equivocation as “nuanced” & “measured”. It’s another way to pull a switcheroo to make Palestinians culpable for Israeli genocide.

An Israeli ceasefire in Gaza is a qualified thing because although they’ve stopped carpet bombing, they have not lifted the embargo of Gaza which requires massive medical aid, reconstruction supplies & equipment, food stuffs since their farm lands are devastated.

School started in Gaza & there is no place for kids to go since Israel bombed so many schools claiming they were taking out Hamas rocket nests. Photo after photo show children trying to learn in bombed out schools. There are images of rescue workers still looking for bodies in cement rubble; of children playing & people trying to camp & sleep & cook in rubble. Even a rookie reporter knows Gaza is where the story is if you’re talking about recovery from Operation Ethnic Cleansing.

Massive protests around the world have of course ebbed for now. Rallies, pickets, flash mobs, speak outs, forums, panels must now build the cultural & economic boycott (BDS) of Israel. Building the boycott is not at odds with protest rallies but comprise an integrated program for steadfast solidarity with Palestinians in Gaza & in the West Bank.

(Photo of children in Gaza is from FB wall of