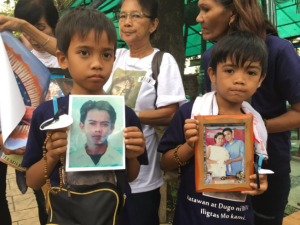 These are Filipino children orphaned by Duterte’s war on the poor under the guise of a war on drugs. Small children & teenagers are also dying in the campaign as what Duterte calls “collateral damage” but it’s not certain at all if they were caught in crossfire or directly targeted.

It’s appearing more likely they are targeted since a bill has been working its way through the Philippine Congress to lower the age of criminal responsibility from 15 to 9-years-old to prevent “pampering” of children who commit crimes thinking childhood gives them immunity from prosecution & “knowing they can get away with it.” Duterte claimed in a speech last December that a whole generation of young children were becoming drug runners, thieves, rapists & must be “taught to understand responsibility.”

Since Duterte initiated the death squad war on the poor on July 1st, 2016, over 8,000 suspected drug users & street peddlers have been shot down in the streets like animals. That is 1,000 death squad victims every month & he said he is committed to continuing the campaign until his term ends in 2022.

Our fullest respect for human rights activists opposing Duterte’s death squads & our sincere condolences to the families who have so violently lost their beloved.