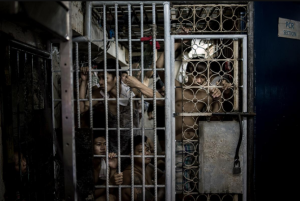 These are detainees in Police Station 6 in Santa Ana, Manila. Imagine that human beings accused of a crime are housed in cages like this–worse than animals in a zoo. Duterte was asked about the Human Rights Watch (HRW) report released today accusing him of inciting & instigating over 8,000 extrajudicial killings & denouncing the war on drugs as a war against humanity. Duterte answered: “When you kill criminals, it is not a crime against humanity. The criminals have no humanity. Goddammit.”

Phelim Kine, the HRW director for Asia, said “When we write this report, we write these things to be admissible to an international court of law. Everything in here has been reviewed by five lawyers. So this type of document means that at some point President Duterte has to worry about if & when he is going to retire & he might actually retire to a prison cell someday unless there is some serious 180-degree change in policy.”

Duterte & his officials carrying out this campaign should be prosecuted & placed in maximum security for the protection of Filipino working people. Vengeance is a good percentage of the law so it’s almost a pity that human rights activists don’t employ the same barbarism to punish human rights criminals as those criminals use against the defenseless poor. They would never place such monstrous criminals in a cage.

Our fullest solidarity with Filipino human rights individuals & groups standing against this barbarism.

(Photo by Carlo Gabuco for HRW)